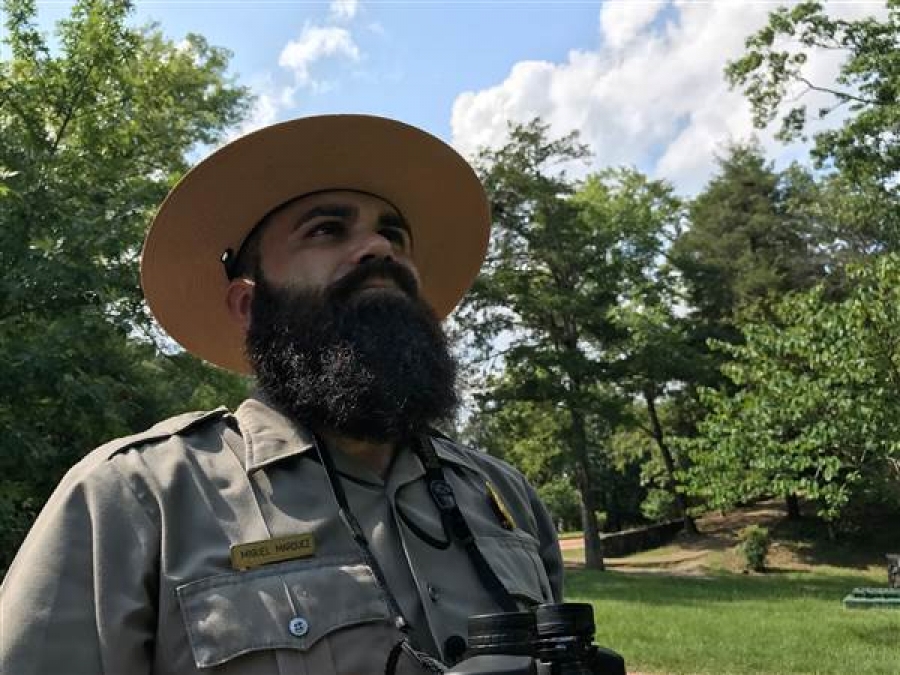 by Suzanne Gamboa and Melanie Bencosme

For years, nature was Miguel Marquez’s escape from the rough streets of Oakland, California. Then it became his life.

Marquez is a ranger with the U.S. National Park Service. He has worked at Kennilworth Aquatic Gardens and Anacostia national parks in Washington, D.C. and at Hot Springs National Park in Arkansas.

Sporting a wiry, mountain man beard, Marquez embraces the nation’s system of canyons, waterways, wildlife, monuments and historical sites. “It almost feels like a paid vacation because the work that I do becomes second nature. I love the environment,” says Marquez, 35.

He wants others to feel his love for the outdoors, particularly Latinos who have little or no exposure to the national park system. And he wants the park system to connect with more Hispanics.

To that end, he’s taken young Latinos hiking and camping, organized a “Park After Dark” with Latino Outdoors in Washington, D.C. and carried out a Latino Conservation Week in Hot Springs. He's worked with local Hispanic church groups and created flyers to programs in Spanish for immigrant communities.

Marquez’s father was born in Zacatecas, Mexico and his mother is Mexican-American. “Growing up, our culture was Mexican culture. You have the novelas playing. I’m trying to do homework (and) my Dad’s listening to Vicente Fernández. There’s the quinceañeras, the parties."

He recalls his Oakland neighborhood as tough. Friends were shot and killed, he says; police and S.W.A.T would be on the street or raiding neighbors’ homes. But Marquez remembers the watchful neighbors, teachers and coaches.

Back then, Marquez’s green space was the East Bay regional parks and the beach where his parents took him. There, he felt freed from the limitations of his neighborhood and his family’s cramped one-bedroom apartment. He was free to explore, free to discover.

Marquez knows things might have turned out differently. His brother was shot five times and is incarcerated. He remains close to his brother, writing to him and sending him photos.

“He would always be supportive. He would enjoy my pictures. He would share my pictures with cell mates. He’d say they were looking forward to hearing from me,” he says.

Marquez is a walking promotion for the great outdoors. He’s an avid hiker, surmounting tough climbs as he did the challenges in his life. He’s become a mountain biker and a photographer whose pictures have been used by the park service for official purposes.

He wants others to have similar opportunities.

On Sept. 5, Marquez started his new job at Juan Bautista de Anza National Historic Trail in the San Francisco Bay area, closer to Oakland, where he grew up.

“I want to be able to end up in my own backyard and working for the National Park Service in the San Francisco Bay area, to be able to give back to those kids that I once was."

Best part of growing up Latino: “Morals and work ethic and drive. With Oakland, that’s what got me where I am today … Also, staying close to family is a big part of being in a Latino family.”

What's your favorite Latino guilty pleasure? “Probably my mom’s pozole or enchiladas, but the real ones, not something from a store.”

The #NBCLatino20 honors achievers who are making our communities and our nation better. Follow their fascinating stories throughout Hispanic Heritage Month.